Depraved Journey from Clan to Cult

From The Pagan Science Monitor

It all started innocently enough — when he was living in Miami shortly before Y2K, someone asked Eric Francis if he wanted to adopt a mouse. A family had just acquired a cat and the two were not going to mix. The mouse was cute, gray and wiggled his whiskers. He named the mouse Jonathan. He came with a yellow Habitrail.

Jonathan’s official publicity photo, ca 2000. Many readers have objected to a mouse being portrayed naked.

Jonathan’s official publicity photo, ca 2000. Many readers have objected to a mouse being portrayed naked.

“It was one of those moments where you know your life has just changed.” He was living in the Dunes Beach Club, a would-be, has-been hotel and casino populated by Miami’s most elite snowbirds and transients. Planet Waves was just over a year old, but he had already acquired worldwide following of people who clung to his every typo.

“I bonded with Jonathan,” Mr. Francis said. “As I got to know him, he seemed more human. There was something unusual about him. He fit in my pocket and weighed 22 grams. On the astral plane he was a giant. And as I got to know him, I began to acquire his tendencies.”

For example, Mr. Francis began to enter buildings through the basement, then come up to the first floor. When eating in a restaurant, he would always sit quietly in the corner and munch unobtrusively.

He began giving talks at local New Age bookstores, and was getting $100 each for channeling sessions. “He was in contact with what he called the Muse Musculus, the part of the soul that is eternally one with the Mouse,” said Florence Dickens, owner of Sagittarius Rising Books.

With Jonathan rooted in his aura, Mr. Francis seemed to acquire extraordinary powers. Planet Waves became the most popular astrology website on the Internet. People renewed their subscriptions at an astonishing rate, arrived at his door with gluten free muffins and gathered around him seeking the wisdom of the cosmic rodent. Up and coming folk-rock stars and trendy young Amsterdam DJs sent in their CDs. He had to rent three rooms at the Dunes to accommodate the incredible fuss, dubbing the suite “The Mousepad.” Mouse droppings were everywhere. 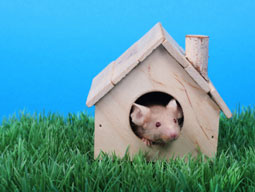 Climate-controlled mouse domicile, which cost $5,000 each.

There were also naysayers. One morning someone left a huge mousetrap outside the Mousepad door, baited with a copy of Disney’s Ephemeris. There was a note. “You have too much Neptune in your chart. This is totally delusional.”

Finally, after things at the Dunes got out of hand, he moved to Seattle, where he said, he was going to start an astrology religion based on ancient mouse-lore.

“Mice were the original stargazers,” he said, “and lots of people in Seattle would go for that.” He rented a private jet so that he could fly with Jonathan in comfort. He stopped in major cities along the way, greeting his disciples and apostles across the Midwest, the Southwest, the Midsouth and finally the Northwest, visiting PetCo locations and giving spirited talks called, “The Voice of Your Inner Squeak.” He encouraged snake owners to feed their reptilian pets hunks of tofu instead.

In Seattle, he converted a large house into a vast Habitrail. As the word spread, thousands of people had visions of the archetypal Mouse, defected from their Protestant churches and arrived at his door, sometimes with truckloads of cedar shavings.

“I dreamed we were both deer mice making love,” one reader said in an email. “It was so romantic. Why don’t you write more monthly horoscopes?”

“It was all very cute at first,” said one former follower. “We were the Mouse Clan and Eric was our shamanic leader. It was just like you would expect the New Age to be. Everything was so delightful. Back then, Eric was attuned to the wisdom of the mouse. But it wasn’t just the mouse. He really had a deep connection to the rodent. You could tell, because the website was a rat’s nest.” 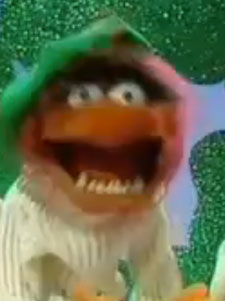 Animal is one of several celebrity cult members, along with Tom Cruise, John Travolta and Barbara Walters. Animal wrote the preface to The Mouse in the Mirror. Photo by Annie Leibovitz.

They raised money for the community by making incense out of the dried droppings. Hundreds of his followers were living with him in the Seattle Habitrail, which was expanded to several city blocks. It was wired with Ethernet, Bluetooth and Wifi. But no computers were allowed — only wireless mice. Habitrails sprung up in other cities, such as York, London, Paris, and Brussels.

When he wrote the runaway bestseller The Mouse in the Mirror, Oprah invited him onto the show, but he said it would be too commercial and exploit the mouse energy.

That’s also right around when things turned strange. One night, Mr. Francis claimed to have had a visit from the extinct Australian short-tailed hopping mouse. The massive, 80 gram mouse told him to put the entire worldwide Habitrail system onto the central Australian time zone. Members everywhere had to set their clocks and watches to Alice Springs in the Central Desert. Mr. Francis vowed to move the clan there someday and find living hopping mice.

Then came one of the clan’s oddest habits. “I thought it was a little odd when we would do what he called ‘mousing around’,” said a friend and Mouse Clan supporter. “We would break into luxury homes and try to steal crumbs off the floor late at night. It’s not easy. Most of these people have maids, or at least they sweep. But he would tell us, ‘They always leave behind something’.”

He became obsessed by paper clips, bits of string and scraps of insulation. “We stashed these in the temple, called The Hoard. Only certain disciples were allowed into The Hoard,” said a former member of the Mouse Clan. “It was disturbing and elitist.”

“There was the whole pup thing,” said another. “Mouse pups are pretty darned ugly, but he insisted we agree they were really cute, even though we didn’t think so. The mouse was taking over his mind and he started to take over our minds. He made me think like a mouse. I began to forget I was human. No matter where I was, I would mouse around. I started to compulsively seek out drainpipes and cracks in the floor. I couldn’t stop collecting crumbs. It was awful.”

He made all the women stop shaving their legs, so they would be cute and fuzzy. Razors were banned from the Habitrail complex. The diet was reduced to crumbs and cheese. 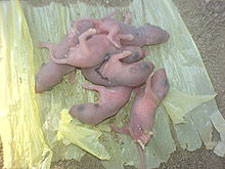 As cute as chocolate labs.

One week, he wrote a horoscope that eliminated the conventional signs and used a diversity of vermin as the archetypes. There were signs like Possum, Rat, and even Capybara. He sent it out to everyone like it was totally normal, expecting them to just give up their established zodiac identity and be something like a squirrel.

“The funny thing is, everyone went along,” said longtime horoscope proofreader, Golde Tzeitel. “I thought we would get a lot of complaints, but everyone loved it.”

Then while he was living in Seattle, Mr. Francis was visited one night by a mysterious guest — a skunk, who came into his room and offered him additional wisdom. “It wasn’t just ‘a’ skunk, it was The Skunk,” he said in his unauthorized autobiography, The Unauthorized Autobiography of Eric Francis. Notably, The skunk spoke to Mr. Francis in Sanskrit, revealing many secrets of the universe and teaching him about the lunar nodes and the asteroid (77364) Maus. the asteroid of evolution.

The skunk took its place in the life of Mr. Francis alongside the mouse. He had become polyanimist. Many people tried to leave the clan with this development, but by this time, their minds were fully under his control. 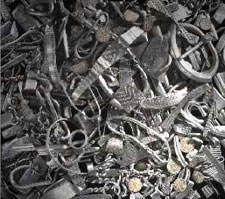 The Hoard. It was later discovered that there was a secret cult within the cult that met in The Hoard, called The Order of the Rodent.

Then, in a mass three-way interspecies commitment-to-freedom ritual at the Seattle Civic Center attended by thousands of his most devoted followers, the mayor and the entire City Council, Mr. Francis revealed what he said is his true identity.

“My name is Francis Skunk Mouse,” he said, his authoritative voice booming through the arena. He pronounced Francis, Fwwaaaaancis. “And I am the leader of the Skunk Mouse Clan.”

“I thought it was really pretentious,” said one longtime follower. “But I went a long with it. I still don’t know why.”

“Everyone was there, even people you wouldn’t expect, like Sally Brompton,” said one witness. “It was really starting to seem a little cultish.”

Now aided by both the mouse and the skunk, his powers became extraordinary.

“But at least he spent more time out of the house,” said one cult member at the time. “Under the guidance of the skunk, he would go out foraging and sniffing a lot. He constantly sprayed himself with skunk oil. He smoked a bit of skunk weed. He would stamp his feet and raise his tail. He had become a whole different person.”

“No, no,” said Brompton, horoscope columnist for the Mail on Sunday. “I’ve seen his chart. This is the real Eric Francis. You better get used to it.”